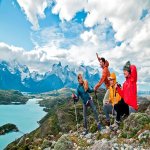 All the information you need about Chile, in a resumed document.

Looking at a map of Chile you cannot but feel a touch of amazement: what an exceedingly long, narrow strip of land, stretching along the coast of southern South America. Tucked as it is between the towering Andes mountains and the endless Pacific Ocean, it would not seem to have much room for anything.

Politically, Chile is divided in 12 regions, including the Antarctic territory, plus the metropolitan region.

The official language of Chile is Spanish, and its currency the Chilean peso. Chile is a mestizo country, of mixed European and indigenous extraction, and the indigenous tradition is still visible in several parts of the country. Chile's literacy rate is one of Latin America's highest. Nearly 90% of the Chileans are Roman Catholic, but there exists a freedom of religious expression here.

You'd be amazed, though. Its 4.300 km-long, 180 km-wide territory harbors some of the finest scenery in the Americas, a bewildering variety of climates -only the humid, hot tropical ones are absent and landscapes ranging from the world's most arid desert to the rainiest spot on the planet, including a Sahara in the north, a California in the center, an Alpine district in the midsouth and a Norway in the deep south, plus some places that bear no comparison, such as Easter Island, Patagonia, Tierra del Fuego, Antarctica and the Atacama Desert.

Add to this a prosperous economy, some of the best telecommunications anywhere, good infrastructure and health services, friendly people, excellent tourist services and a total absence of poisonous plants or insects, and you have a destination that is hard to outclass.