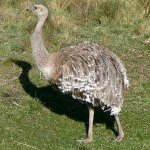 It is the South America Ostrich. It is grey-brown with white spots. Its long neck and its beak are of a hazel shade. Its lower body is white. This animal lives in groups and it is known for running very fast.