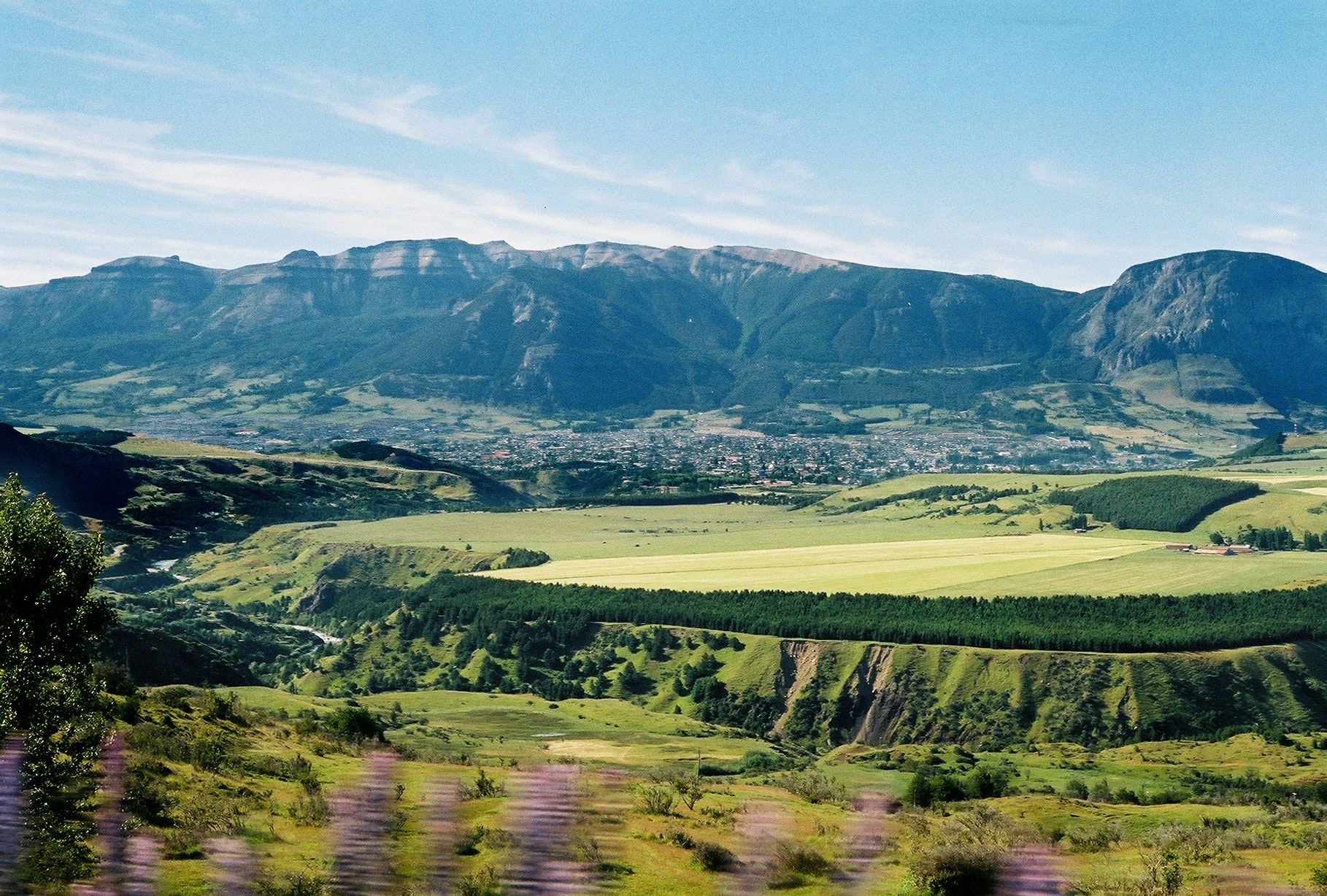 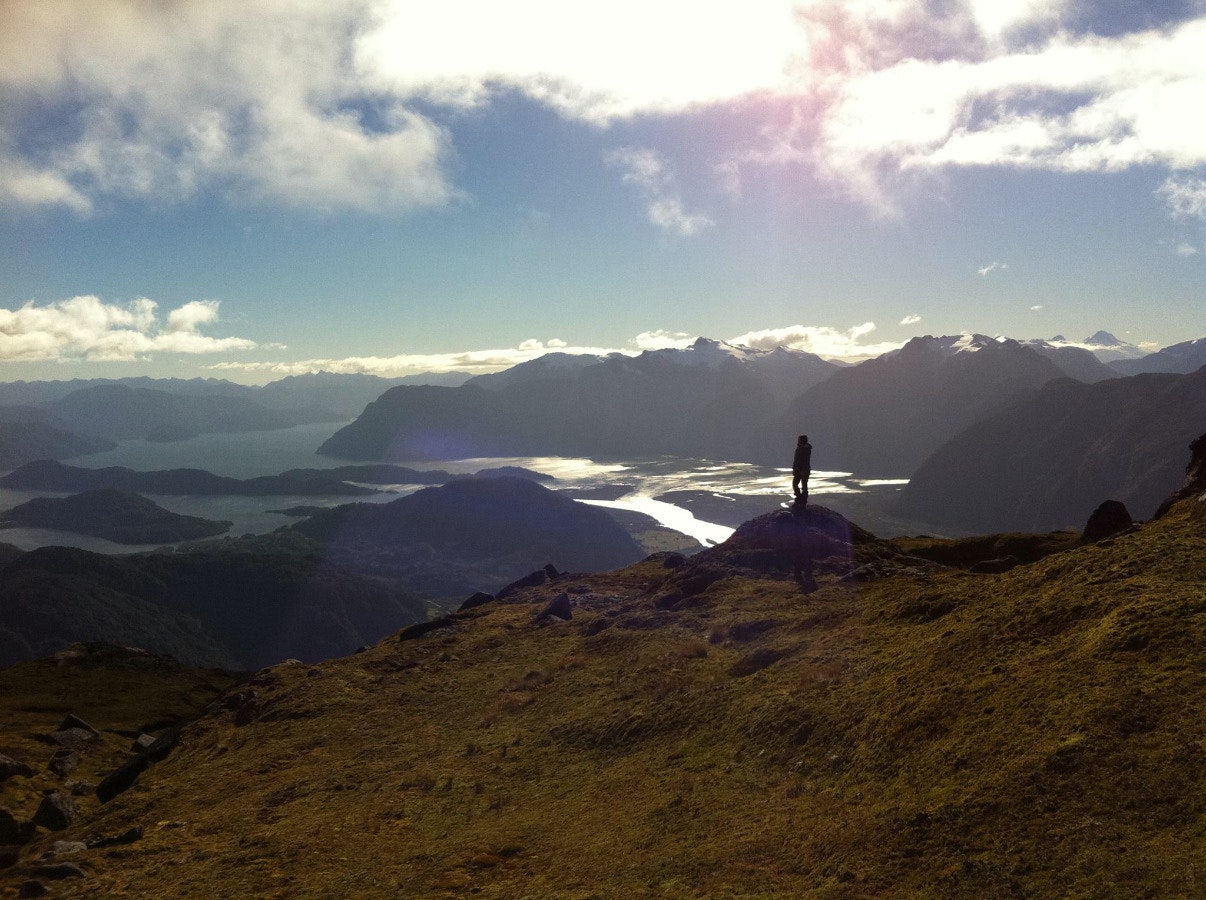 Coyhaique is the capital of the Aysen Region in Chile's Patagonia, along with Simpson and Coyhaique Rivers. The name Coyhaique in tehuelche language means "place where one lives."

Its climate is maritime rainy in the coastal area and cold steppe near the border with the Argentina Patagonia. Because of the latitude that is found in, the temperatures are cool throughout the year, with snow in the winter. It is also characterized by the presence of dry winds.

In its surroundings you can find several natural areas like the Monumento Natural Dos Lagunas (Natural Monument) and the Reservas Nacionales (National Reserves) of Cerro Castillo, Coyhaique y the Simpson River.

Among the most important economic activities are cattle ranches that produce meat, leather and wool.

Both towns are the most important in the 9th region and are located at a distance of 67 kilometers.

The entire city is surrounded by exuberant vegetation, which can be seen in the Plaza de Armas and as you walk the streets. It is also surrounded by rocky mountains such as the Cerro Mirador.

The climate in Puerto Aysen is oceanic, mild and rainy with no dry season with abundant rainfall throughout the year.

Puerto Aysen is the gateway to the attractions of the region such as the Laguna San Rafael National Park and los Campos de Hielo patagónicos( Patagonian Ice Fields).

Coyhaique was populated by tehuelches, alacalufes (kaweskar) and Chonos, who moved along the canals and the slopes of the Andes. However, with the arrival of the Spanish colonizers much of its population was decimated by disease, battles, or losing their livelihoods.

In the nineteenth century began the occupation of this territory through the region of the Araucanía, Patagonia Argentina, valleys of the rivers Aysen, Simpson and Lake General Carrera. Others decided to settle in the Chiloé Archipelago. The commerce in the area was based on the establishment of cattle ranches.

Because of this, significant burning of native forest had to be done, to create what became known as Pampa Corral, opposite the junction of the rivers Simpson and Coyhaique .

The city of Aysen, in turn, was discovered by Hernando de Magallanes. This territory was known by the Spanish as the Trapanada Province and renamed “Tierras de Diciembre " (Land of December) by Magallanes during his expedition in 1520.

The first settlers arrived in Puerto Aysen in mid-nineteenth century from Chiloé, Argentina and Germany, who based their business in farming, fishing and cypress logging from the Guaitecas Islands.

In the early twentieth century, the Chilean government gave land grants in the Chilean Patagonia to some societies like the Sociedad Industrial de Aysén (Aysen Industrial Society), which committed itself to settle in the area together with 100 families and establish regular navigation between Aysen and Puerto Montt. This led to the creation of the city of Puerto Aysen in 1913.

The Puente Presidente Ibáñez (President Ibañez Bridge), which crosses the Aysen River and is considered a National Monument, was inaugurated in the 60s.

It has more than 2,500 acres of land, a circuit for vehicles of 9 kilometers and pedestrian trails that provide insight into a group of lakes, such as Venus Lake, surrounded by native forest. It is located 5 kilometers north of Coyhaique.

3 blocks from the Plaza de Armas of Coyhaique we find this museum with collections of archeology, photography, zoology, history, mineralogy, etc..

It is located in one of the banks of the Simpson River and corresponds to a stone carved by wind and erosion, which seems to form the profile of an Indian.

This place is located 3 kilometers from Coyhaique and is one of the most visited during the summer in the area.

It is located 64 kilometers south of Coyhaique and belongs to one of the 5 natural sanctuaries in the area. It is crossed by the Carretera Austral and has plenty of protected areas to observe the flora and fauna such as the huemul, Chile’s national animal which is found to be endangered.

This is a rock wall with traces of cave paintings from the tehuelche people with handprints of adults and children.

This national park has over 40,000 acres of natural areas, where there are creeks and summits. The rivers are outstanding, especially the Simpson River where fly fishing is practiced. Other tributaries are the Rivers Cascada de la Virgen and Correntoso.

This protected area is located 20 kilometers east of Coyhaique. In its 180 acres we find a native wildlife inhabited by the black woodpecker, red fox, Patagonian thrush and black-necked swan among others. We can also see the deciduous forest flora of Aysen, Caulker, ñirre and the Chilean strawberry.

It is located 15 kilometers from the city of Puerto Aysen and 82 kilometers south of Puerto Chacabuco. It is the largest natural park in the Aysen region and 400 thousand acres belong to the Campos de Hielo Norte (Northern Ice Fields).

Other attractions are the Monte San Valentin, with over 4000 meters of altitude, and undoubtedly the stunning Laguna San Rafael and its Glacier that can be crossed in small boats to observe the melting glaciers.

It is the longest suspension bridge in the country. It is 210 meters long and divides the city of Puerto Aysen, joining Coyhaique with Puerto Chacabuco.

At its side it has an attractive craft gallery, where products are often developed in the area, especially in leather, wool and wood.

It is an urban park located next to the Plaza de Armas of this place. You can see a full view of the town and its surroundings.

Located within 1 mile of Puerto Aysen, it is a place where native species of the area are found and conifers such as pine, cypress of the Guaitecas , ferns and others.

In Coyhaique you can do all sorts of recreational activities beacuse of its surroundings of exuberant nature .

Beginning with the Cerro McKay (Hill), lwhich is ocated within the city, you can go hiking on the trails, climbing, mountaineering or simply watch the panoramic view of the Simpson River, mountains, forests and lakes, which are only 20 miles away from the city center.

The Simpson River is one of the biggest attractions of this place and it is known to be ideal for fly fishing. Simply strolling along its waterfront is one of the best activities that can be done in the area.

In the Plaza de Armas of Coyhaique we can find many craft shops, especially products made from leather and wool from sheep that live on farms in the area, native wood and stone as a memento of this beautiful area.

Another attraction is the Monumento al Ovejero in honor of the many people who historically engaged in this activity.

In addition to this, you can go fishing at Lake Elizalde and Lake Atravesado, which are less than 50 kilometers from Coyhaique. These areas have camping areas, boat, bicycle and horse rentals and tours to see the surroundings.

On the other hand, in Puerto Aysen we find the biggest attraction in the area: the Campos de Hielo Norte (Northern Ice Fields) and the spectacular Laguna San Rafael, with its glacier of the same name. This is a must see for all who are in the area and can enter the magical world of the Patagonian channels, where immense glaciers lie and the silence is broken only by the masses of ice falling into the water in such a unique and overwhelming show.

Apart from the Laguna San Rafael, in Puerto Aysen we can find other attractions like the Coyhaique National Reserve, with natural areas that are home to native wildlife species such as pumas, pudúes, huemul and guanaco, plus seagulls, black woodpeckers and the Kingfisher. In the coastal area we can find sea lions, dolphins, otters and sea lions.

The flora of this place has trees such as cinnamon, coigue and cypress of the Guaitecas as well as myrtles, ñirres, beech, ferns and nalcas.

Other attractions are the Quitralco Hot Springs, found in the fjord Quitralco; the Monumento Nacional Las 5 Hermanas, which corresponds to a small archipelago of six islands that lie off the fjord of the same name, 50 kilometers away from Puerto Aysen.

To reach Coyhaique you must take a flight to Balmaceda Airport, located 55 miles away from the city. There are also buses that come from the cities of Osorno and Castro, in Chiloe.

By car you can reach it from the Carretera Austral or Argentina crossing the channel area via barges.

In Coyhaique bicycles are also used to move within the city and there is a rental service which allows you to rent one and use it for hours and full days.

Also covering the distance in small boats is another excellent choice for backpackers or travelers who do not have their own vehicle.

To get to Puerto Aysen by way of airplane is the fastest way through domestic flights arriving at Balmaceda Airport, which is located 120 kilometers from Puerto Aysen.

It can also be reached via the land route, from Argentina, entering Chile by the Coyhaique Alto way (pass), which is located approximately 110 kilometers from the city, on a road that has gravel areas and paved areas as well.

By way of sea you can get here from Puerto Montt, taking a ferry that crosses the Chiloé channels and the Archipelagoof the Guaitecas Islands. The trip ends in Puerto Chacabuco and lasts for about a day. From there, there are only 15 kilometers to Puerto Aysen.

There are buses that travel in Puerto Aysen and companies that lease cars and by doing this; you can visit all the attractions of the 9th Region.

The telephone code of Coyhaique and Puerto Aysen is 67. To call from abroad you must dial the international code of Chile, which is 56, then the city code, 67, and finally the telephone number.

Where and what to eat

In this area we can enjoy the best of Patagonian cuisine, with native ingredients of the area such as salmon and shellfish, especially crab and king crabs.

Also, there are other famous traditional recipes of Southern Chile such as lamb, white and red meats, seafood chowders and warm desserts, that mix dough and syrup for example the picarones, made with pumpkin dough.

One of the most famous dishes is barbecues on swords, where the lamb is roasted vertically for 3 or 4 hours and consumed accompanied with red wine. Also the dehydrated or smoked meats are very traditional.

To drink, mate is the typical drink of Patagonia, which is made out of various herbs and is useful to keep the body warm amidst cold temperatures and winds that exist in the sector.