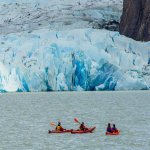 Just as you can find mountains all across the Chilean territory, you can come across bodies of water. Chile has over four thousand kilometers of coast, where you can practice sea kayak, and in the interior you can practice another discipline known as river kayak.

Kayak is quite a popular sport that is practiced in solitary or in groups, inside a kayak, which is very similar to a canoe in shape, with a double spade row. Many tourists travel to southern Chile to practice kayak and rafting in the rivers of the Patagonia, which are known world wide due to its excellent rapids category IV and V.

River kayak is quite an exciting activity, which means riding a kayak down a river and sort all the rapids of waters that are formed in the water, which are classified between I and VI, according to difficulty and speed. In Chile, most rivers in Patagonia have rapids that are classified as III and V. Futaleufu River is the most popular one amongst experts, who travel to the river to hold international competitions of this sport.

Depending on the place in Chile you are and the level of expertise you have, the rivers where you can practice kayak are:

The equipment needed to practice river kayak includes a kayak, a neoprene suit (to protect your body from the water, branches, rocks and the water’s temperature), a double spade row and a lifesaver jacket, as well as a helmet.

Considering that is a risky sport, it is recommended to begin practice in class I rivers, get use to the equipment and increase the danger and speed slowly. Also, you should never go down a river alone, always go in groups and with the supervision of an instructor who knows the place. It is important that you know how to swim and that you always have an emergency plan, just in case.

It is a bit simpler than river kayak. Sea kayak can be done in pairs, in special kayaks that permit you to ride longer distances in quieter water. The rest of the equipment is the same that is used in river kayak.

Sea kayak is also known as “touring kayak” or “tripping kayak” and the main idea here is to immerse yourself in quiet water, such as the sea or lakes, so you can observe nature all around you. It is a less risky sport that still implies physical strength, because you have to row a lot to move around, although the key element is to want to be there in the middle of the sea.

Although the first people to use the kayak were the Eskimo or Inuit people, who built them using the skin and fat of animals, today kayaks are constructed using other materials such as wood, plastic or glass fiber. You can also find kayaks made out of polycarbonate or composite, and some that are inflatable.

To practice this sport you can travel to the following destinations: