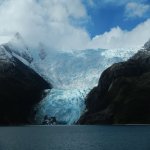 It is the third largest park in Chile, with 1.460.000 hectares. It is located about 800 nautical miles from Punta Arenas and to the west of Puerto Williams, and it includes fiods, islands and peninsulas, channels and seine, glaciers and snowdrifts.

It was named after one of the most important Salesian priests in Chilean history, Father Alberto María de Agostini, who was in charge of drawing a series of maps of the Magallanes region and other portraits which are a fair reproduction of the beauty of the most southern part of the country.

The National Park is home of the Darwin mountain chain, which is the final presence of the Andes, a long chain of mountains that appears as small islands on this part of the globe; and the Beagle Channel. These are both important places used to describe the Tierra del Fuego area.

The Beagle is a place to travel to the Magellan's Strip and the Murray Channel, the latter is where Charles Darwin had a small encounter with the natives of this zone, encounter which would be of vital importance when the scientist sat down to write its theory on human evolution. Around this place was where Onas or Selk-nam and Yaganes built their homes and set with their families, becoming one of the most populated places in the region.

It's cultural value can only be overcome by the ecological and environmental importance, considering that the Agostini National Park is home of a series of native species, such as the coigue and the canelo.

One of the well-known places in the park is the Marinelli Glacier, the biggest in the park; the Agostini Glacier, surrounded by mountains where people can disembark for a while; and the Guanaco Pampa, ideal for those who like to practice recreational fishing. All these places are inhabited by animals, some of them in danger of extinction, such as the guanaco, sea dogs, sea elephants, otters and chunchungos, among others.