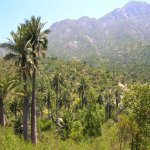 It is located in southern Aconcagua Valley, in Valparaiso. It has an extension of 8 thousand hectares, it was created in 1967 and it was declared a Reservation of the Biosphere in 1985. There are three sectors in it: Granizo, Cajón Grande and Palmas de Ocoa.

To get to the park you have several options, depending on the place you want to get in. To Granizo, for example, you can get through Route 62, Lo Orozco, Troncal Sur, Ruta 5 Norte or La Dormida. On foot you can take a bus to stop 45 and then walk the rest of the way to the door, which is about a kilometer away.

To Cajón Grande, however, you can get to using the bifurcation seen at stop 40 of Granizo Avenue, taking the road to the right for about three kilometers. All access paths to Granizo are the same used for Cajón Grande.

To Palmas de Ocoa, the third sector of the park, you can get to using Route 5 Norte, in km 98, and then you take the route F304 to Palmas de Ocoa (14 km). Buses leave you six kilometers away from the entrance.

The paths you can cover inside La Campana National Park have been defined as excursion paths in all three different sectors of it. In Granizo there are three paths: Andinista, Los Peumos - Portezuelo Ocoa and La Canasta.

The first one is the only route that will take you to the top of La Campana Hill, where you can go and come back in about eight hours (7km), and where you can see the Olmue Valley and the Andes from a viewpoint installed at the top. There is a defined time to go up, which is ten a.m. In the second path you can see the Ocoa Valley and Cajón Grande. It is a shorter way to cover (max. 3 hours), in a road that connects all three sectors inside the park. La Canasta is a small path, designed for interpretation.

In Cajón Grande there two more paths of excursion. The first one is Plateaux, which covers 4.2 km and allows you to observe the Olmue valley and the palms in Quebrada Alvarado. The second path is Portezuelo Ocoa, which as 4.4 km of extension. On the road you can see different types of Oaks of Santiago, which is a protected species now.

Finally, in Palmas de Ocoa there are two more paths you can take so you can see more of La Campana. The first one is called La Cascada (6km), which leads you to a viewpoint from where you can see a beautiful waterfall of about thirty meters. In the second path, Al Amasijo, you walk about 12 km.

For those who prefer to camp or eat surrounded by nature, the park's administration has defined specific places where you can take on those activities. In Granizo there are 23 different spots where you can eat and cook, with tables, a restroom and showers. In Cajón Grande there are 23 more spots and in Palmas de Ocoa there are 32. In all three places there is clarified water, so it is recommended to boil it before drinking it, or just drink bottled water.

Recreational activities that you can practice in the park are the following: