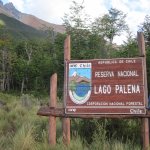 To go to this national reserve you need the authorization of CONAF, the government organization which is in charge of all the forests and reserves in the country. In anyway, the journey makes the ride worth it. Located 14 miles from the small city of Palena, it's a big reserve, with 40.500 hectares where you can find high mountains, huge blocks of ice and a big forest which ends in the lake itself.

The lake it's placed in Chilean and Argentinean territory, where it's called Lago General Witter.

In Chile, the rough weather conditions and the tricky access make it difficult to get to the lake, so much so that CONAF keeps a forest ranger in the park only in summertime, and is forced to close the premises for the rest of the year.

In the reserve you can find the first part of the Chilean Path, a bi-regional road of 37 miles long, which goes all the way down in Patagonia. The so-called Cordon Patagonico Oriental (Eastern Cord of Patagonia), has shaped the place, giving it singular beauty, all because of the action of glaciers.

You can get to the lake by a path apt for horses and hikers, although it is also possible to get there from Argentina, using a road that goes by the border of Lago Witter.