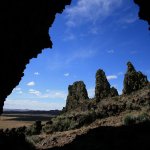 Pali Aike means "devastated place" in aónikenk, language used by the native ethnic groups of Patagonia; although it is also known as "The Devil's scum".

The Pali Aike National Park was created in 1970, and it includes 5 thousand hectares of forest, volcanoes, caved and pampas inhabited by guanacos, armadillos and ñandúes (rheas). One of the most well-known places in the National Park is the Pali Aike cave, where archeological evidence of life has been found, probing that people used to live there and use the cave as shelter over eleven thousand years ago.

In the park there are four paths and a variety of caves. If you have the proper authorization, you can go to Cueva Fell (Fell Cave), where you can see cave paintings over nine thousand years old.

The Park is in the driest area of the Patagonia and there are signs of basaltic lava all around, which turn the landscape into something very much like what we know of the lunar territory.