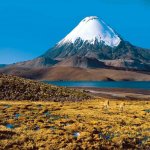 Located near the cordillera and puna in Putre, Lauca National Park includes almost 138.000 hectares. The geography of the place is irregular, with volcanoes that go over the six thousand meters of height and a sector that is plane, where you can see volcanic walls and lava fields.

The climate in the park is dry although it does present rain in summer and snow in winter, in height. The average temperature is 18°C, which lowers considerably at night. It is a deserted place where there is little vegetation, mostly cacti.

To get to the park you take the International Highway CH11, which goes across the park and is in excellent conditions. There are other ways to get to Lauca: through the northern border you can use the route Visvirí - Parinacota, and in the southern border you can use the A-231 or A-235 route. Both roads are covered in dirt and also let you go into Las Vicuñas National Reserve and connect the protected areas to the south of the altiplano.

The Park has several areas for accommodation and camping, in Chungará, where you can also visit areas for dinning surrounded by nature.

For those who enjoy walking from place to place to get to know your surroundings, there are several paths you can cover and also learn about natural resources of the area, as well as cultural landmarks that you can see on the way. The paths are all over 4500 meters above sea level, which you should take into account before your journey begins if you are affected by the altitude and exercise at that height. In the park's administration, which is located in Parinacota (19 kms from Lago Chungara), you can get pamphlets with all the necessary information on paths and excursions inside the park.

The signalized paths are two: Cotacotani y Parinacota. The first one is eight kilometers long and it takes about four hours to cover, while the second path is covered in little over an hour, considering it's only three kilometers long.

To regain your strength and energy after spending the morning walking, near Lauca you can find three rustic restaurants, in the town of Chucuyo, where you can try typica dishes prepared with native vegetables. Outside the park you can also find restaurants and hostels, in Putre.

In Parinacota there is also an environment information center, the Las Cuevas and Chungara nursery and a guest house in Putre. All the services like telephone, gas station, first aid and supermarkets are either in Putre or Arica.

As far as recreational activities go, they are divided according to different areas within the park: