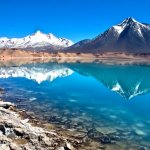 To get to the park you can take the Camino Internacional, which connects Copiapo and Paipote to Portezuelo Santa Rosa, leading you to the lagoon of the same name. To access Negro Francisco you take the same route to Maricunga Salt mine and then take the road to Valle Ancho, Astaburuaga River and Negro Francisco.

The paths available to cover on foot are three: Río Gallina, Interpretación Ambiental and Quebrada Santa Rosa. In them you can see flora and fauna, typical of the area, which becomes more abundant as you travel south. You can cover the paths on foot or car, although you should ask for more information at the administration’s office about specific tracks.

There are also viewpoints in the national park, in Negro Francisco Lagoon and in Santa Rosa, where you can really appreciate the landscapes that mix desert areas and small oasis.

When it comes to recreational activities to occupy your time at the park, they are as follows: