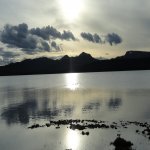 With areas between the 300 and 650 meters above sea level, the biggest is called Laguna Parrillar with 970 hectares, which is completely frozen when winter comes because of its altitude and the low temperatures of the season. The ice, especially on its borders, sometimes it's about 11 inches thick. In other sectors the snow reaches the 2 feet tall, all the rivers and lagoons in the reserve turn into ice.

The reserve has a path where you can go hiking, it has seven stations and 19 marked places for camping, where you can fish if it's the right season, which is between october and march. On the walk you can take a closer look at the trees and woods, composed mainly of Lengas and native bushes. There are many animals in it as well.