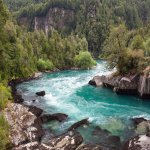 It's 12.000 hectares filled with wonderful forests and protected animals, right where the Chilean Patagonia begins. The Futaleufu National Reserve is known for the river of the same name, Futaleufu which means "Big River" in mapudungun, the native's language. It's one of the most visited places in the Austral Road, and it is considered as the best rapids river in the globe.

It was created to protect native species, like the Andes' Cyprus and the Huemul, both of which are nearly extinct. That is why it is administrated now by the National Corporation of Forests, which keeps two forest rangers at the reserve at all times, looking after the species and giving information to anyone who asks.

The Futaleufu reserve is the habitat of a wonderful ecosystem. It's a small reserve, but it shelters many endangered species. We already mentioned the Huemul, but you can also find vizcachas and quirquinchos, which are small animals similar to beavers; condors, Chile's typical animal, which looks like an hybrid of an eagle and a raven; amphibians and the Argentinian wild cat.

Only ten kilometers away from the Argentinian border, it was first populated by people who came from that country, and crossed the border over a hundred years ago. Since then, the relationship between the two countries has been close in this part of the frontier.

In the reserve you can also find the Espolon river, which runs just by the side of the Futaleufu, and is born from the beautiful lake of the same name. It's a smaller and quieter river, ideal to practice kayak and rafting, and its border is simply fantastic to walk around with family.

The Futaleufu and the Espolon rivers are filled with trouts and salmons, so it's very common to see many fishermen with their equipment trying to catch something along them.

Because of its location, the reserve was visited by only 300 people in 2004, with no promotion or advertisements of any kind. At the same time, because of the size of the park, people are very hospitable, and eager to welcome Chileans, as well as people from all over the world.