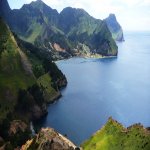 With over 9571 hectares, the Archipelago Juan Fernandez National Park includes Santa Clara, Alejandro Selkirk and Robinson Crusoe Islands. It is located 667 km from the coast, right in front of San Antonio Harbor, and you can get there by plane or sea.

It is considered “a paradise lost” because of the species that live there and by its history, which is known around the world thanks to the book “Robinson Crusoe”. It was on this island that Alejandro Selkirk lived alone for four years, until he was rescues by a band of pirates. In colonial times the island was where prisoners of war were sent and in 1915 a German ship ran aground by its shores. The ship is still under the water, over 65 meters deep into the Pacific.

The islands are volcanic in origin, so you can find many ravines, hills and mountains all around. They are excellent for those who want to see the island and cover it on foot; they can always find surprises on the way.

In spite of it being a small island, in Juan Fernandez you can find anything you may need to spend wonderful vacations. The town of San Juan Bautista features accommodations and supermarkets where you can buy groceries if you’re planning a camping trip, for example. In that town you can also find the park’s administration office, where you can get all kinds of information about the park, the animals found there, the activities you can practice in it and the sectors that are open to the public.

To camp, you can go to Los Cañones, 600 meters away from the administration, where there are defined spots for tents, with potable water and restrooms. Meanwhile, in El Palillo there are 15 more spots, where you can eat. In El Yunque, a smaller place, you can find tables, kitchenettes and garbage bins.

To see the island and appreciate its beauty you need to walk around. To do that, several excursion paths have been established. In Juan Fernandez there are three paths. The first one is the road to Alejandro Selkirk Viewpoint, which can be done in a little over an hour and from where you can see both ends of the island. You do not need a guide to cover this path, and there are several information stations along the way. It is a difficult path to cover, though, because it includes some high slopes (30º).

The second circuit is Villagra, which is 5 km long, and it’s the continuing path of the first one. It is less difficult to cover and you can see the wonderful flora and fauna of the island along the way.

The last path is the road to the airport. It’s a 13km long road that can be covered in about seven hours from where you can see Santa Clara Island.

Other activities and places to visit are: