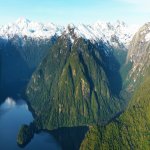 It's the biggest private park in Chile with over 317 thousand hectares. It was created in 1991 by Douglas Tompkins, an American businessman, and in 1997 the Chilean government validated it. In 2005, it was named Sanctuary of the World, and the American organization called Conservation Land Trust donated the land to organization "Project Pumalin", which is now in charge of the administration and to keep the objectives of the project alive: to preserve and protect the species which live in Pumalin.

Even though it's a private park it does not function as one, there is no monetary charge to enter and the administration works with the government to maintain the ecosystems alive within the park.

Because of its private nature, the park has encountered political opposition. In spite of that, it keeps on growing. Infrastructure is still being built to accommodate tourists, and to achieve a level of excellence already in place by other parks in the world. Without a doubt, Pumalin has nothing to envy them.

Before Tompkins bought this piece of land it was abandoned, occupied only as a place in between the fields that cattle used for feeding, one of them -the biggest- was called Reñihue. It also was the home of over 7 thousand hectares of native forest, which had no commercial value, so it was not exploited at the time. That is why Tompkins' interest was born, to create a park of ecological value, formed only to preserve and protect the forest and animals inside its limits.

Pumalin is also a place to have fun; there are many activities which can be practiced within its doors. Because of its varied geography, which includes mountains and rivers, visitors can chose what to do while they're at the park: horseback riding, taking walks around a lake, climb a mountain or riding in a canoe down one of the many rivers in Pumalin. There is something for everyone.